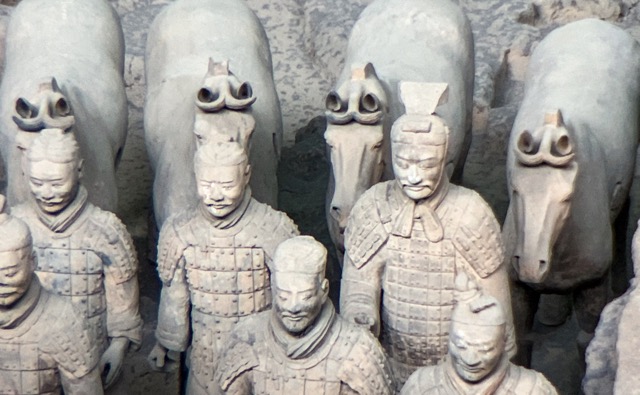 Blogging from. China didn’t work out so well. We got a VPN (you need this to get to blocked sites from China) but I still had so much trouble posting anything with photos, I just gave up and put it on Facebook. I was disappointed.

We very much enjoyed China. The people were great, the food was great and I think we kinda lucked out with the smog. It was only bad 3-4 days we were there. We saw everything: The Great Wall, the terra cotta soldiers, The Forbidden City, Tibet we even saw pandas!

The funniest part, we thought, were all of the people staring at us. Our guide said a lot of the Chinese tourists were from rural areas and haven’t s en a westerner in person. People would stand close, maybe a foot away, and just stare, maybe they’d take a picture. Bill was very popular. I have so many photos of Bill with Chinese or Tibetan people that wanted a picture with him.

It took us a long time but I think we’re finally over the jet lag. One of our dogs, Lem, is still upset that we left. He’s been very clingy.

Lem might be upset because there’s a lot going on in the house. My sister, Laura sold her house, which was my parent’s house. We went last weekend to pick up my half of their furniture, etc. now our house is packed with stuff! Maybe he thinks we’re packing. We’re giving him lots of hugs and cookies until he feels better.